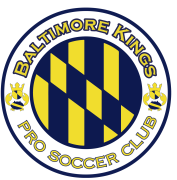 Introduction
Baltimore Kings Pro Soccer Club is a professional soccer and futsal club in Baltimore, MD. Founded in 2015, the club is operated by Baltimore Pro Soccer, LLC. The club is home to teams and year-round soccer programs for players of all ages and skill-levels.
We will take a conservative, controlled, and personal approach to win one supporter at a time and build a successful professional soccer club in Charm City. In Baltimore's history, there have been over 20 professional soccer clubs. Unlike other league systems around the world, winning does not ensure longevity. Professional soccer leagues in the United States currently do not allow for promotion and relegation among teams and even in years immediately after winning a championship, clubs have folded. Success on the field is one of many objectives for the Baltimore Kings, but more importantly it is paramount to create and maintain a strong foundation to base our achievements.
Front Office & Staff:
​Josh Danza - Founder, President, Men's Pro Coach
Vaughn Ridings - Advisory Board
Gavin Boyer - Advisory Board, Director of Youth Futsal, U23 Men's Coach
Tommy Humphries - Advisory Board
Brian Greuter - Advisory Board
Stephanie Danza - Director of HR
Chloe Obara - Women's Team Assistant GM
Mike Kin - Youth Futsal Coach
Marlowe Guy - Youth Futsal Coach
Matt Vega - E-Sports League Commissioner